Clive, the seventh child of the Beaubruns, young, intelligent and ambitious, with a knack for business, worked for one of the largest firms in St. Lucia.

In January 1921, he married Hettie, the third child of the Cox’s. He knew then that she was his perfect match but not that he was also marrying a born business woman, who would one day become his ideal partner in business as well.

By 1926 they started their family. Hettie, always looking towards the future, felt that in addition to her roles as wife and mother, she could also take on and welcome the challenge of a new business.

When she presented Clive with her idea, the immediate response was not what she had hoped for. He felt that it was a trying time to start a new business and did not believe that they had sufficient capital to support the venture. She reminded him of their small joint savings account holding the 108 Pounds that they gotten as wedding presents. It had remained untouched and she thought that there was no better way to use it than to invest in their family’s future. It took some convincing but in the end, Hettie was victorious. 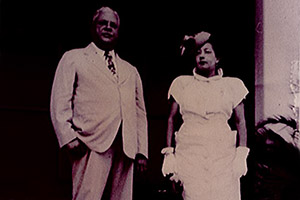 She purchased ten bags of a brand of refined sugar from a unique source that guaranteed that the sugar would not be available elsewhere. She then set out to contact a group of housewives, some via the telephone and others in person. Within a couple days, Hettie had sold her ten bags of sugar. She doubled the second order, which went just as fast. Before long, a small grocery had started. She named the business Cox and Company. Her secret to success being that in addition to the normal fast moving items, she always promised something unique, something not available anywhere else.

Business progressed and grew over the years and eventually it became necessary for the management team to grow also. Clive stepped in and once again became the perfect partner.

When the great fire of 1927 devastated the town of Castries, it greatly affected the Beaubruns but they quickly picked up the pieces and three years later, in 1930, went into the oil and steam business as Agents for Esso Standard Oil and Stockard Steamship Corporation. During the 2nd World War, Cox & Company played a major role in the refueling of aircraft at Beane Field in Vieux Fort, now called the Hewanorra International Airport. 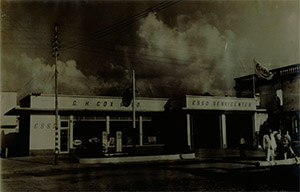 Twelve years later Cox & Company Ltd. experienced its second major setback. The 1948 fire destroyed their building, forcing them to relocate to Jeremie Street where they remained for over a decade, with the family living upstairs and the business being run out of downstairs.

In 1955 the company made further progress and became agents for the Shipping Line Costa Line of Italy. They were also agents for the popular passenger ships calling in St. Lucia monthly to pick up St. Lucians, bound to seek their fortune in Britain.

As the business went through its many changes, Clive and Hettie maintained their family’s best interests as their top priority. They decided that they needed to separate their home from the business and dreamed specifically of a home outside of Castries with a view and a garden for their children to explore. Like with everything else they did, through careful planning, years of budgeting and sacrifice, in 1942, Clive and Hettie purchased Diamond Jubilee Lodge from the Harris Family. It was a lovely home on Morne Fortune, overlooking the harbor and the town of Castries. 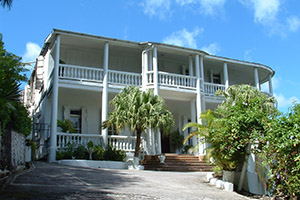 The old, small, wooden structure posed many challenges and demanded much refurbishing and for a while they were torn between renovating the existing structure so that the historic integrity would be maintained or starting fresh with stronger, more durable concrete. They found a happy medium. They decided to build something that would last for generations, could be expanded to accommodate the requirements of the family and be designed to honour the original architecture. They furnished it tastefully with all the household fittings and furniture that they had been accumulating over the years for this very purpose.

Diamond Jubilee was renamed St. Mark’s by Father Harcount, who was the homes first visitor. Today it stands proudly offering breathtaking views of Castries and boasts a perfectly manicured garden. The business was carried on by the second generation and now the third generation. Cox & Company has served St. Lucia for over 77 years.

With a complement of well over 60 full time staff and 60 part time staff, Cox & Company’s portfolio now includes but is not limited to :- Cox Shipping – port agency, freight and brokerage, Cox Travel which provides a ferry services between the French islands, and Cox Tours and Destination Management – land and cruise based.

They use their rich history, and wealthy of knowledge and experience to delivery uncompromised levels of quality and professionalism, as they know that their grandparents would not have it any other way.