The Commonwealth of Dominica, located in the Eastern Caribbean, is the largest and most northerly of the Windward Islands. It lies between the French Overseas Departments (DOMS) of Guadeloupe and Martinique. Dominica is approximately 29 miles long and 16 miles at its widest point; with an area of 289.5 sq. miles. Dominica is the dividing point of the Caribbean islands. It divides the Windward Islands to the west and the Leeward islands to the east. The highest point is Morne Diablotin,rising at a height of 4,747ft. Dominica has some of the richest mountain rainforest in the Caribbean. Dubbed “The Nature Island of the Caribbean”, this rugged landscape of blue-green slopes, rushing streams, waterfalls, and cloud-drenched mountain peaks, rises to almost 5000 ft. giving the island a legendary beauty. Dominica is volcanic in origin with rich fertile soil and abundant tropical rain forests. Dominica’s Morne Trois Pitons National Park, has been inscribed by UNESCO as a World Heritage Site and is home to one of the largest boiling lakes in the world. 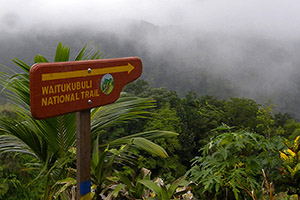 Dominica has many festivals throughout the year. During the month of May, Dominica hosts its annual Hike Fest. It flaunts the Caribbean’s first long distance hiking trail called Waitukubuli National Trail, which is 115 miles long. Waitukubuli leads hikers into the heart of local communities, through mountainous landscapes, rain forest and alongside rivers and waterfalls. The island’s Morne Trois Pitons National Park has nearly 300 miles of footpaths. Hikers get to experience the sighting of volcanic activity in the Valley of Desolation, a region filled with boiling mud ponds and small geysers as well as sights like the Boiling Lake, Titou Gorge and Emerald Pool.

Kalinago – one of the few Carib Indian populations to avoid extirpation by European Conquers, resides in Dominica. Kalinago Week celebrates the culture of the indigenous people. The event is held in September to commemorate a bloody trade dispute in 1930 that became a rallying point for Kalinago community pride. It is a week-long celebration of panel discussions, art & craft exhibitions and food and dance festivities.

World Creole Music Festival is another big event held in the Nature Isle. Some of the most renowned musical groups and soloists from the creole speaking world, flock to Dominica every October for this unique festival. Performing zouk, konpa, zydeco and other forms of creole music, this festival is one of the few indigenous music events in the Eastern Caribbean.