Guadeloupe is part of a group of eight inhabited islands in the Lesser Antilles, between the tropical Atlantic and the Caribbean Sea. It’s two major islands, Basse-Terre and Grande-Terre, are separated by a channel, the Rivière Salée. Grande-Terre is a limestone island and consists of plateaus, plains and hills. On the other hand, Basse-Terre is a volcanic island with high mountains and a tropical rain forest. When viewed from above the two are said to resemble a butterfly.The population of Guadeloupe is approximately 472,000 people. The climate is humid and tropical with a dry season from January to May and a wet season from June to December. 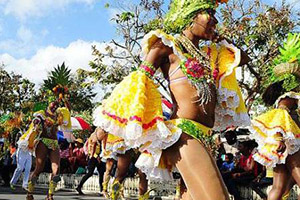 Guadeloupe has a list of events on its calendar including Carnival, the Creole Blues Festival and the Festival of Women Cooks. Some say that if you can only go to one event in Guadeloupe make it Carnival. During the week before Ash Wednesday, islanders dress up in colorful masquerade costumes and revel in the streets. There are two main parades, one in Pointe-à-Pitre and the other on Basse-Terre. The day before Ash Wednesday sees the people dressed as black and white devils dancing in the streets and on that night, islanders “cremate” a stuffed dummy called King Vaval. 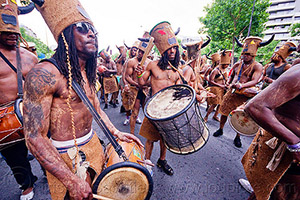 During the Creole Blues Festival, blues music rings out loud once a year on Grande- Terre. For this weekend in May, blues musicians descend upon the island to play several concerts. One can also see documentaries of the history of Creole Blues Music during the Festival. In August, Guadeloupe hosts a five hour banquet that serves up traditional Creole cuisine called the Festival of the Women Cooks. The goal of the banquet is to share traditional food with all who wish to attend.