Les Saintes is found about 15 km off the southern coast of Guadeloupe. On 4th November 1493, this small archipelago, made up of 9 islands was discovered by Christopher Columbus. It is known worldwide for the beautiful bay of Anse du Bourg. It is considered the third most beautiful bay in the world. Terre de Haut of 4.52 Km2 and Terre de Bas of 9.45 km2 are the two main islands and also the only ones inhabited. An estimated 3,000 inhabitants reside between them. A convenient ferry connects the two which takes about 15 minutes to cross.

Terre de Haut, reachable by ferry or air from Guadeloupe, welcomes many a tourist ashore for the day. Terre de Bas has just one beach and a few easily accessible creeks. It is how-ever far less frequented and has managed to maintain its charm and tranquility, giving the impression of another era. It is worth at least a one night stop to enjoy the authenticity of the place and the peacefulness. 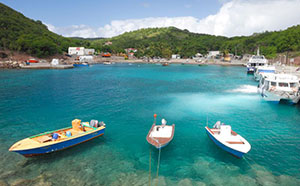 The islands of Les Saintes, thanks to their isolation over the centuries, have maintained a unique character. They offer their visitors numerous different beaches, which in our opinion are some of the most beautiful of Guadeloupe with many walks and unforgettable views, similar to that of its neighboring islands such as Dominica. For diving fans, Les Saintes is a true paradise. The dive sites are among the most beautiful found on the island of Guadeloupe.