St. Lucia, also known as the Helen of the West Indies is the sort of island that travelers to the Caribbean dream about. A lush tropical gem and one of the Windward Islands of the Lesser Antilles, it is located midway down the Eastern Caribbean chain, between Martinique and St. Vincent. St. Lucia is 27 miles long and 14 miles at its widest point. It’s shape has been compared by many to that of a mango or an avocado. The population of St. Lucia is roughly 180,000 people. 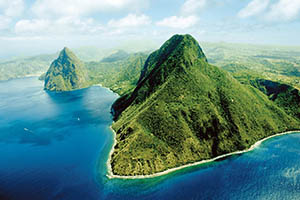 The beaches of the west coast owe their beauty to the calm Caribbean Sea whilst the Atlantic Ocean kisses its Eastern shore. St. Lucia’s Pitons inscribed by UNESCO as a World Heritage Site, soars 2,000 feet up from the sea, sheltering magnificent rain forests where wild orchids, giant ferns and birds of paradise flourish. St Lucia seesawed between the British and the French until 1814, when the Treaty of Paris finally ceded the island to the British, ending 150 years of conflict during which St Lucia had changed flags 14 times. 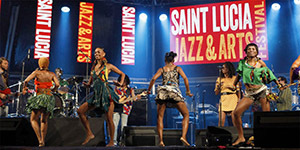 There are a few events worth noting in St. Lucia. The biggest event of the year and a well-known attraction is the St. Lucia Jazz and Arts Festival, held in the month of May. It isn’t just a concert; it is a week-long celebration that suffuses the entire island, with nightly performances everywhere from big stages to parking lots and local bars. 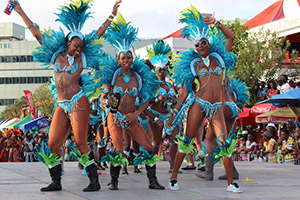 The month of July hosts the most colorful event on the islands calendar. St. Lucia Carnival is a celebration and display of St. Lucian art, culture, music and dance. Events and parties lead up to the main stage Carnival parade where revelers take to the streets in a spectacular array of color and music, as each band strives to capture the title of “Band of the Year”. Following these two significant events is St. Lucia’s biggest Cultural event, Creole Day, also known as Jounen Kwéyòl. Jounen Kwéyòl is celebrated in St. Lucia on the last Sunday of October across the entire island, and has been held annually since 1984.